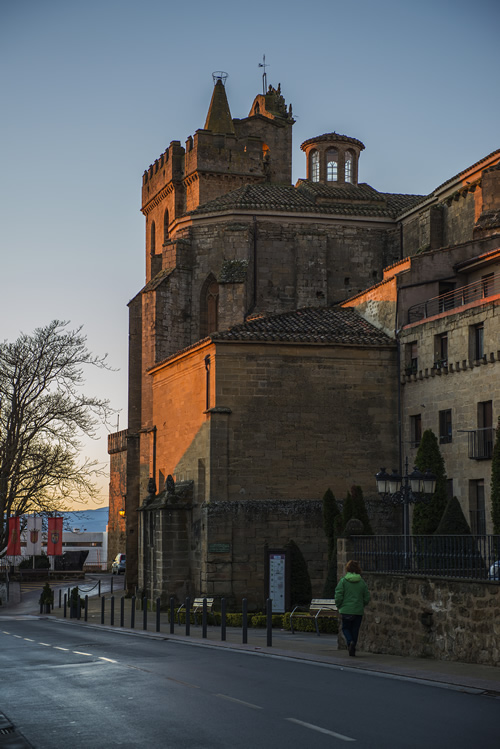 From the 16th century “San Juan” lost its meaning as a temple-fortress. Several building works were made in the temple, which changed its medieval origins in accordance with the magnitude of these works.

The tower was a former military castle with the function of defending the door under it. It seems to belong to the global fortification or walling that took place in the 14th century. When it is viewed from the countryside it keeps all its martial splendour, even at the battlements. From here the tower shows three different parts. In the lower part there is a big relieving arch, pointed and jutting out at the edges. Inside this arch, and much lower there is another arch, which is also pointed but open. There are two loopholes at the strip of wall between both arches. The door was inside the inner arch, which was lowered and raised by chains.

In the second part there is another fine relieving arch. And, in the third part, there are very wide windows with a bevelled edge. The sides have this structure too but they lack the arch and the door in the lower part.

The front of the tower is completely different. The two lower parts are joined in one and it is occupied by a big relieving arch. Below there is a double arch that is also pointed and it leads to the inside of the lowest part of the tower and it has the same structure as the opposite arch leading to the outside, but this one is lower. All of it makes a beautiful set of arches.

In the first half of the 16th century a bell gable was built at the top of the tower.

2- The temple was widened to the north

In the 16th century the left arm of the transept was widened. The former Gothic door was destroyed and now it has a very simple style, of which only a small font for holy water remains at the lintel, together with two buttresses topped by gables with volutes on the right of the door and a gargoyle representing a woman called “Maripena” by the inhabitants. There are Gothic corbels that are decorated both with figures and plant motifs.

In 1553 Juan de Asteasu began building a chapel that covered the monumental door at the foot of the temple, but only the spring of the vaults remain and it is thought to have been similar to that of “Santa María de los Reyes”.

Between 1732 and 1740 Juan Bautista de Arbaiza built the present chapel at the foot of the temple.

Arbaiza created a constructional space that broke with the structures in which it was included. His work shows an utter mastery of symmetry and he built a temple with a structure that was closer to the human essence, more down-to-earth. It is a combination of the style prevailing during the last period of the Baroque art and the Classic period that was struggling its way through at that time.

It has an octagonal floor plan, with a diameter of 18.80 metres, being 19 metres high. Some big Corinthian columns spring from the angles and are topped by musician angels, whose backs are the starting point of the vaulting nerves that intertwine a grandiose star. There is a double set of arches, one on top of the other, springing from the same angles of the octagon and making up a wide arcade. They are both circular at the upper and lower floors respectively. The ornaments at the vault recall the history of the Virgin of “El Pilar” in Zaragoza.

The reredos of the Virgin of “El Pilar” was made a short time before the building of the chapel. It is Baroque, from the end of the 17th century or the beginning of the next one.

The sculpture of the Virgin of “El Pilar” belongs to the mullion of the former front door of the temple, from the 13th – 14th centuries. It is standing, elongated and narrow, which is characteristic of these type of images. It has a big charm and shows a great natural aspect. The image's face is oval with almond eyes and highly raised eyebrows. It is holding a flower in her right hand and the Infant on her left arm, who is turned towards the centre and is blessing with his right hand, whereas he is holding an apple in his left hand..

This sculpture from the 13th – 14th century is polychrome. This polychromy was applied in two different periods: from the 16th and 17th centuries. The Virgin's face was the most altered part.

It is surprising that this sculpture has nothing to do with the Virgin of “El Pilar” in Zaragoza, from the aesthetic point of view. The only common aspect is that it rested on a pilaster, hence its name: “El Pilar”.

It was worshiped all over La Rioja Alavesa and Navarre during the Middle Age and the Renaissance.